What a great game at Loudoun today between Margaret Gillies (West Kilbride) and Sandra Carruthers (Prestwick St Nicholas) in the final of the McCall salver.

The game was all square at the turn with Sandra taking the lead on the 11th then Margaret winning 12 to take it back to all square. Thirteen was halved, Margaret took 14 and 15, going 2 up but Sandra won 16.

The 17th was halved which meant Margaret headed to 18 one up where she got the half she needed to win the match.

A very deserving winner in a super game which was played in a very friendly manner. 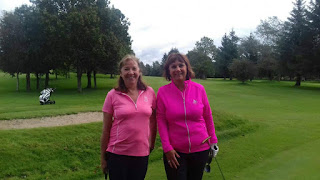