Are you looking to make up for all the golf you've missed out on this winter? Then why not come and play in the 2010 Scottish Ladies’ Amateur Championship at Craigielaw Golf Club from 18 – 22 May.

While this is predominantly a scratch Championship it is open to all Scottish female amateurs, who fulfil the entry qualifications, with plenty of prizes for the qualifying rounds including;
- Individual scratch and nett prizes for individual rounds and aggregate totals,
- Nett and gross prizes for club teams of two players, and
- Prizes for County teams of three players.
(Club and County teams must be entered on separate entry forms which have been sent out to your Clubs and Counties respectively.)

The format of the Championship is two rounds stroke play qualifying over 18 and 19 May with the lowest 32 aggregate scratch scores qualifying for the main match play Championship and the next 16 qualifying for the 2nd flight, the Clark Rosebowl. In addition to the golf, the ‘Scottish’ is also renowned for being a great social week of golf and is always a chance to meet up with friends old and new. If you’re not lucky enough to make it to the latter stages it’s a great opportunity to watch the top Scottish Amateurs compete for the title and for those that don’t make it to the final of the main Championship, there is always the legendary Friday night party to look forward to.

The venue for the 2010 Championship is Craigielaw Golf Course in East Lothian. This is a Championship links course which also boasts outstanding practice and clubhouse facilities. The entry fee of £35 will guarantee you three rounds of golf (including one practice round).

Entry Forms from the SLGA web site.
Posted by Captain at 09:40 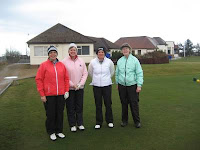 The final was played on Monday 22 March at Barassie Golf Club. Early in the morning the weather was not looking good for the final with strong winds and rain. At 11.00 the winds reduced and the rain stayed off for most of the round.
The final was between defending champions, Janice Gallagher and Alison Baillie (West Kilbride) and Irene Smith and Sara Ann Bottomley (The Ladies Club, Troon)
Irene and Sara Ann were giving 7 shots to Janice an Allison. The final was keenly contested with Janice and Alison eventually winning on the 17th hole, 2and 1.
Congratulations to the winners Jancice and Alison and also to Irene and Sara Ann for reaching the finals. 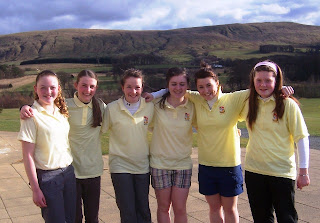 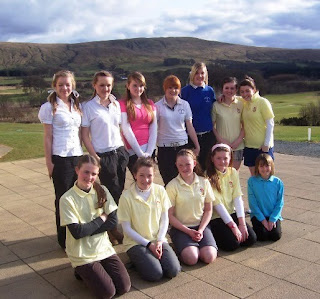 Ayrshire Girls posted a win in their first friendly match of the season against South of Scotland Girls on Sunday, 21st March. This was played on a fine dry day over Brunston Castle Golf Course. Results are as follows:- Ayrshire names first. Handicap allowances are given. 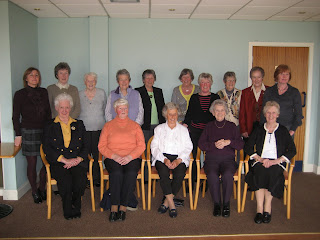 The Past Captains Lunch was held at Brunston Castle Golf Club. There was a good turn out with 15 past captains attending. A good time was had by all with plenty of good chatter. We thank our President Marion for organising the lunch.
Posted by Captain at 11:11

The first medal for the West Girls is being held at Troon Portland on Saturday April 17th @ 1pm. Any Ayrshire girl that is interested in joining the Association should contact me on 01292 470572 or ann66wallace@hotmail.com for further information. Alternatively have a look at our website - www.wsgga.btik.com
Posted by Ann at 14:07