The Scratch prize was won by Donna Jackson and Liz Stewart from
Renfrewshire with an excellent 75 and Ayrshire were runners up with a
great score of 79 by Catherine Malcolm and Debbie Watt. To break 80
today was a fantastic score.

Ayrshire also featured in the Handicap Section with our own Captain,
Sheila Adams, and partner Aileen Anderson taking first prize with a nett
80.5. Second handicap went to Helen Faulds and Christine Kelly, D&A, on
the better inward half from Ann Shanks and Rona Agnew, also from D&A.
Fourth handicap went to Carol Fell and Fiona Roger from Renfrewshire.

Congratulations to all prizewinners and thanks to D&A for hosting the
event. Pictured are Sheila and Aileen with their prizes. 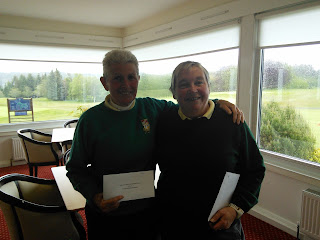