A great Championship at Prestwick this year with a new Champion, Sarah Ramsay, winning at the 15th hole yesterday against Roz Purdom.

The conditions were trying all week but at least it was dry for the most part on the final day. In the morning semi final matches top qualifier Joanne Sharp lost out to Roz Purdom on the 16th hole and Sarah Ramsay overcame 2017 champion Liz Keohone at the 15th.

Both girls found bunkers on the first hole of the final and walked off with a half, a nice par 3 at the 2nd put Roz one up but Sarah won the next 2 holes to go ahead. Sarah then won 6 and 8 to go 3 holes up at the turn. A couple of halves at the start of the back 9 before the girls reached the long tricky 12th hole. Playing particularly long into the wind Sarah hit a superb third shot onto the green to stretch her lead to 4. Roz then got a hole back at 13 but found the bunker on 14 which allowed Sarah to go 4 up with 4 to play. A half at the tricky 15th was enough for Sarah to win her first County Championship.

Sarah receiving her trophy from the Club Captain 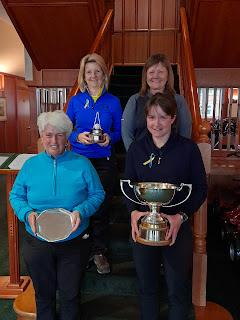 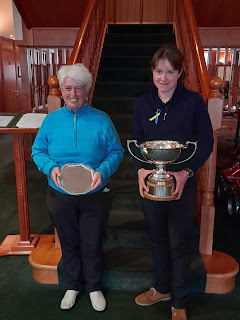 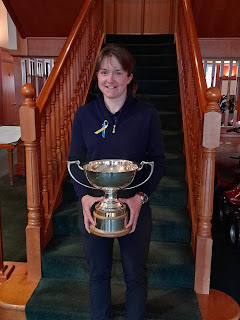