It was a great day for Ayrshire players in the Stroke play stages of the Scottish Womens Amateur Championship at Gullane.

Louise Duncan (West Kilbride), runner up at the same stage when the event was last played at Barassie in 2019, went one step further with an impressive 9 under par total to top the leaderboard. After dropping 2 shots in her opening 2 holes she completed a level par round in the morning. In the afternoon she had 2 eagles in the space of her first 5 holes and a further 2 eagles on the back 9 on her way to a fantastic 9 under par round of 65. 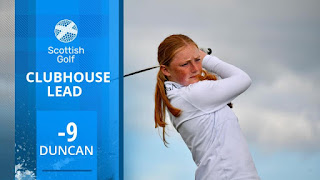 Three players are one shot behind including Luisa Gibson (Irvine) who was the leader after her first round of 69. Luisa narrowly missed out on qualifying for the match play at Barassie but is safely though this time. 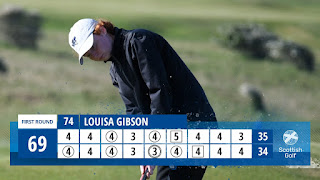 A further shot behind is Rachel Foster (St Nicholas) who improved on her 10th place at Barassie by qualifying tied 5th on 7 under par.

Ayrshire has a 4th qualifier for the match play stages with Hazel MacGarvie (Royal Troon) finishing tied 10th. Hazel had an albatross and 2 eagles on her way to an afternoon round of 3 under par.

Commiserations to Freya Russell (Royal Troon) who missed out on qualification by one stroke however she has qualified for the Clark rosebowl.

Unfortunately 2 of our Ayrshire players (Rachel and Hazel) are drawn against each other in tomorrow mornings matches but good luck to all the girls. Play well and enjoy.