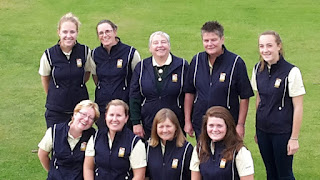 A mixed weekend at Stranraer for the Scottish County Finals as far as results but a fantastic effort by the Ayrshire team against very tough opposition.

Ayrshire were up against the holders, Angus, on day one and despite a valiant effort only managed one point, won by Linzi Allan in the singles on the 18th green.

On Day two they faced the 2014 winners, Midlothian, again the girls played well but were up against birdies and eagles from very strong opposition. Debbie Watt and Hazel MacGarvie secured a half point in the morning foursomes, Debbie did the double by getting a half point in the afternoon, great result having been 3 down early on, and Emma Hale also halved her singles match.

It was the battle for 3rd and 4th place between Ayrshire and Dumfries-shire on the final day.  Determined to leave Stranraer on a high the girls got off to a great start by winning the morning foursomes 2-1.  Needing only 3 wins out of the 6 afternoon singles Jenny Linklater and Hazel MacGarvie won their matches and Linzi Allan halved hers so it came down to the final green where Catherine Malcolm secured the final half point required for us to finish in third place overall.

Angus retained their title by beating Midlothian in a very close match by 5 points to 4.

Many thanks from Sheila and the team to all the travelling supporters, caddies and good wishes from the Ayrshire lady members. 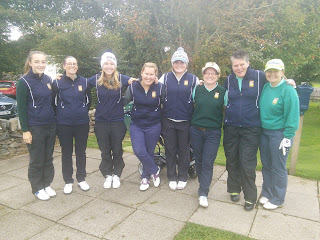