The final of the 2020/21 winter foursomes was finally played on a glorious summer day at Largs Golf Club. 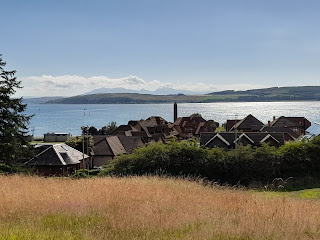 The finalists were the sister pairing of Ann Wallace (St Nicholas) and Susan McKenzie (Balfron) against the Skelmorlie pairing of Janet Harkness and Elspeth Howie. 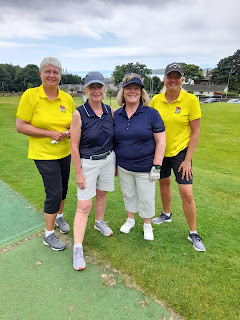 As often is the case, it was a game of 2 halves with the Skelmorlie girls playing steady golf and taking a 3 hole lead at the turn. They then won the 10th hole to go 4 ahead but the sisters came onto their game and took 3 of the next 5 holes to only be one down standing on the 16th.

A poor second shot followed by a 3 putt handed the hole to the Skelmorlie girls who were then 2 up with 2 holes to play. They then got the half they needed on 17 to win the match by 2&1 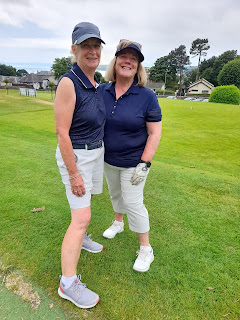 Worthy Winners
Thanks go to Largs Golf Club for courtesy of the course, Sheila Shedden for refereeing, Gillian Pollock for supporting and photographs and to Joanne Sharp and Helen Craig for also coming along.
Posted by Ann at 12:59